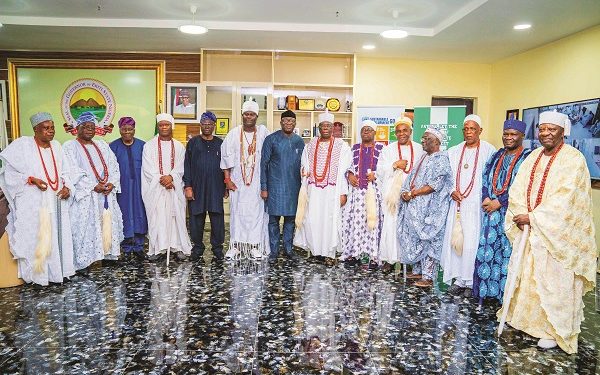 The cold war between Ekiti State Governor Kayode Fayemi and 11 aggrieved monarchs was resolved on Monday by the Ooni of Ife, Oba Adeyeye Ogunwusi. Oba Ogunwusi held a peace meeting with Fayemi and the monarchs in the Government House at Ado-Ekiti. He arrived at the palace of Ewi of Ado-Ekiti about 12:45 pm and was ushered into the Ewi’s chamber for a meeting. Fayemi, Oba Ogunwusi and Prof. Akintoye met earlier before the main meeting with the monarchs. They described the parley as a ‘family meeting’. Oba Ogunwusi, who addressed reporters after the meeting, assured the people the impasse had been resolved. He praised Governor Kayode for his efforts in ensuring there was peace among the monarchs, even visiting the Alaafin of Oyo, Oba Lamidi Adeyemi, to explain his side of the story. The monarch described the governor’s gesture as an honourable move signifying true leadership. He said: “I am here for a particular reason and to the glory of God, we don’t have any issue again. Everything is settled. It is normal for slight differences to happen but it is something within the Oduduwa clan which has been resolved to the glory of God.“The governor is here, all the pelupelu obas are here, the main founding fathers of Ekiti, and I can say the issue has been resolved. They are fathers to the governor and you know we have an amiable son of Oduduwa in the governor.” The Ewi of Ado-Ekiti, Oba Rufus Adeyemo Adejugbe, and Ajero of Ijero-Ekiti, Oba Adewole Adebayo, who spoke for other monarchs, said they had resolved to suspend litigation arising from the chairmanship and related issues. The monarchs blamed the dispute on the communication gap between them and the government, which has now been resolved. Chairman of Ekiti State Traditional Council and Alawe of Ilawe-Ekiti Oba Adebanji Alabi said the row had been resolved, adding that there was no more division among the monarchs. The aggrieved monarchs are the Ewi of Ado-Ekiti Oba Rufus Adejugbe; Oloye of Oye Oba Oluwole Ademolaju; Elekole of Ikole Oba Adewumi Fasiku; Elemure of Emure Oba Emmanuel Ogunleye; Ajero of Ijero Oba Joseph Adewole; Alara of Aramoko, Oba Adegoke Adeyemi. Others are Ogoga of Ikere-Ekiti Oba Samuel Adejimi; Olomuo of Omuo Oba Noah Omonigbehin; Alaaye of Efon Oba Emmanuel Aladejare; Ologotun of Oguntun Oba Samuel Oyebade; and Olujudo of Ido-Faboro, Oba Ayorinde Ilori-Faboro. The meeting resolved the stand-off between Fayemi and the monarchs, who had been in dispute since July 31, following the appointment of Oba Alabi as chair of the Council of Traditional Rulers.
Posted by AA
Email ThisBlogThis!Share to TwitterShare to FacebookShare to Pinterest
Labels: newsy
Newer Post Older Post Home