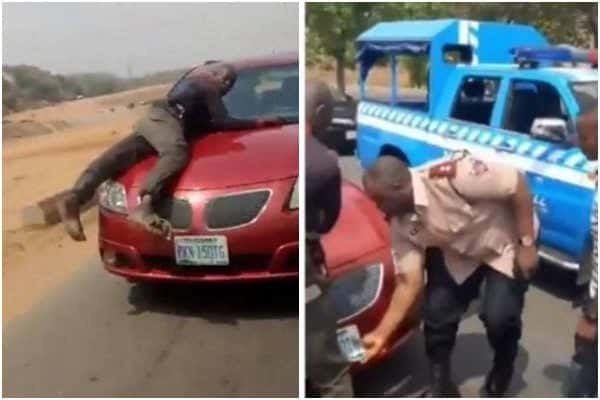 A patrol team caught in a viral video engaging a motorist has been sanctioned by the Federal Road Safety Corps, FRSC. The team could be seen in the viral video pulling off the license plate of a vehicle belonging to a team of journalists.
One of the occupants of the vehicle, a lady, stated that they were harassed by the team because they refused to wind down the windows of their vehicle. According to the lady, they refused to oblige because the men of the FRSC were not wearing a face mask. The action by the team has now been described as uncivil by the FRSC which placed a sanction on them. Read the statement: “The attention of the Corps has been adequately drawn to a video currently dominating the social media sphere about a motorist who had an encounter with FRSC Personnel in the course of carrying out the ongoing enforcement of Presidential/National directive on ‘ Stay At Home’.After a careful study and analysis of the video and what transpired in it, the Corps wishes to inform the public that the following proactive measures have been taken;
The Corps Marshal, Dr Boboye Oyeyemi has ordered the immediate withdrawal of the entire FRSC Team involved in the unprofessional and uncivil act. The action of the Officers involved in that episode is completely contrary to the Core Values and Operational Ethics of the Corps and the Corps frowns at it. The Corps Marshal has directed that the entire team be queried and sanctioned in accordance with FRSC relevant regulations on discipline.The public is therefore called to remain calm & comply with all directives on stay at home & social distance & ensure that they cooperate with security operatives detailed to enforce the Presidential Orders”.
Posted by AA
Email ThisBlogThis!Share to TwitterShare to FacebookShare to Pinterest
Labels: newsy
Newer Post Older Post Home