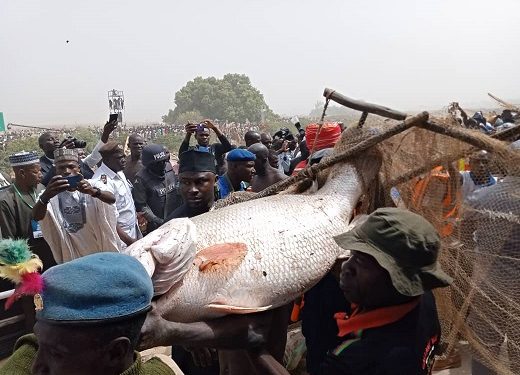 Abubakar Yau from Augie Local Government Area of Kebbi has emerged winner of the 2020 Argungu International fishing festival. He got over N7million, two new cars and two Hajj seats for catching the biggest fish weighing 78 kilograms. Yau’s catch was rated the best among the fishes caught at the Matan Fadah river. Over 50,000 fishermen participated in the annual cultural festival held in Argungu local government area of kebbi state. Malam Bala Yahaya-Bagaye emerged second with 75-kilogramme fish while Malam Maiwake Sani Silami from sokoto stste came third for catching a fish with 70 kilogrammes. Chairman, Northern Governors Forum, Gov. Simon Lalong, donated N3 million to the first position, N2 million to the second position and N1 million to the third position. Dr Hassan Bello, Executive Secretary, Nigeria Shippers Council, presented N1 million to the first position, N750,000 to the second position and N500,000 to the third.Gov. Aminu Tambuwal donated N3 million, N2 million and N1 million to the first, second and third positions respectively and a Hajj seat for the third position.  West African Cotton Company Limited (WACOT) donated a new car, N1 million and Hajj seat to the first position while Dr Zainab Bagudu, wife of Kebbi State Governor, also donated a brand new car to him. Maltina Nigeria Limited donated KEKE NAPEP and motorcycles for the second and third prize winners respectively. The Senate President, Dr Ahmed Lawal, who was also the special guest of honour, said the festival was a demonstration of Nigeria’s rich culture. “When I looked at the fishing pond, I said ‘oh God we are blessed’; what we only need is for us to harness the resources that we are endowed within this country. “The history of the festival is long, dating back to 1934. I learnt that the celebration could not hold for over 10 years due to insecurity.“We have to thank God for making it possible and commend our armed forces for their efforts to secure our nation.“We will not continue to work had to ensure d that you have a good working environment.“This is an international event that drew people from neighbouring countries,” he added. He announced a donation of N5 million to be shared among all participants to give all a sense of belonging. Kebbi Governor Atiku Bagudu described the event as “historic and worthy of celebration” by people of the state and beyond.”“he said it is a celebration of historic people, we must celebrate what unites us more than what divides us.”
Posted by AA
Email ThisBlogThis!Share to TwitterShare to FacebookShare to Pinterest
Labels: newsy
Newer Post Older Post Home