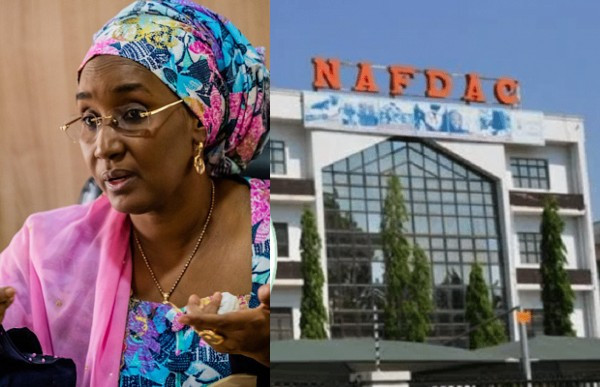 Humanitarian minister, Sadiya Farouq and the National Agency for Food and Drugs Admininstration Control (NAFDAC) have both issued differing statements on how some states in the country received expired rice as Coronavirus palliatives.Recall that the expired bags of rice some states received from the federal government has led to a heated contention both offline and online in the last few days. Ms Farouq who commented on dispute the expired bags of rice ignited before now, had said that the food items were "handed over by the Nigerian Customs Service after being assessed by NAFDAC“.
She said;
“As you may recall, we mentioned here that we distributed the rice relief to the states. The rice was handed over to us by the Nigerian Customs Service and it was assessed by NAFDAC, who issued a clearance before the goods were released for onward distribution to the states.“So, as far as we are concerned, the rice was certified fit for human consumption."
Director-General of NAFDAC, Mojisola Adeyeye however countered the claim in an interview on Channels Television on Tuesday April 28. Adeyeye stated that NAFDAC was not invited “to test the rice” distributed to Oyo State as claimed by the minister, but was only invited to take samples of rice from Idi-Iroko, Ikeja, and Ogun state. She added that the agency “was not asked to test and certify the ones in Ibadan from where other South-west states got their allocations.”
NAFDAC DG said;
“We got an invitation to sample rice from Idi-Iroko from Ogun and Ikeja Customs. Our staff went to Idi-Iroko and Ogun to sample the rice and they also went to Ikeja to sample rice, some of the samples are still in our lab in Oshodi. We tested the samples and they passed.“The one for Oyo State, I cannot say anything because NAFDAC was not called by the Ibadan Command or the South-west command of customs to come and check samples in Ibadan.”So, I cannot say anything about the Ibadan Command rice that went to Oyo and possibly to Osun State."
Mrs Farouq who challenged Adeyeye's comment while speaking at the daily Presidential Task Force on COVID-19 briefing on Wednesday, April 29, insisted that officials of the ministry she heads got a certificate “issued by NAFDAC”. She further disclosed that the Customs and NAFDAC will be sorting out their communication gap later. Farouq said;
“We still stand by what we said because this was what was conveyed to us by Customs and we have a certificate to that effect.“The certificate indicated that the rice given to us is fit for human consumption and that was before I even flagged-off the distribution in Lagos state. We will make that certificate available later today. “Let me also remind us that NAFDAC, Customs, and the ministry respect each other’s mandate while carrying out our respective responsibilities.“So Nigerian Customs Service and NAFDAC, I am sure will sort the communication gap and we will report back to this platform once that is done."
Posted by AA
Email ThisBlogThis!Share to TwitterShare to FacebookShare to Pinterest
Labels: newsy
Newer Post Older Post Home