Alabi Tolani who was set ablaze by her boyfriend for allegedly cheating on him, has died.

24-year-old Alabi Tolani is reportedly dead after being set ablaze by her boyfriend, Orji Ifeanyichukwu for allegedly cheating on him. Orji has been cohabitating with Tolani at his apartment in G54, Army Post Service Housing Estate in Ojo after she allegedly promised to stop prostitution and remain faithful to him. Tolani who began dating Orji in March 2019, died from burns she suffered after being set ablaze by the suspect who got jealous from reading her love chats, claiming he saw nude pictures she was sending to another lover on her phone. 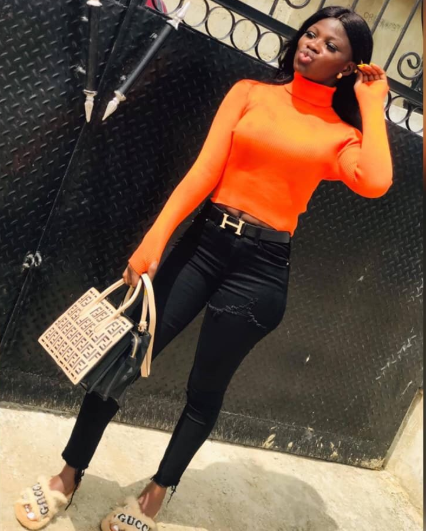 Police spokesperson, Bala Elkana confirmed the arrest of the suspect and death of the burn victim. He said;
“On 7/12/2019 at about 1145hrs, operatives of Iba Police Station arrested one Orji Ifeanyichukwu Victor ‘m’ 19 years old of G54 Army Post Service Housing Estate, Ojo, Lagos for setting one Alabi Tolani Mariam ‘f’ 24 years, ablaze."The suspect confessed that he used petrol to set the victim ablaze.“The suspect who is 19 years met the victim, a 24-year-old girl on 28/2/2019 through a hookup and she moved into his house in March.”"They have since then cohabited as lovers. The suspect finished his Secondary School in 2016 at Gbagada Senior Grammar School and is seeking for admission into tertiary institution.”
Posted by Aitaleabiamo
Email ThisBlogThis!Share to TwitterShare to FacebookShare to Pinterest
Labels: lethal
Newer Post Older Post Home