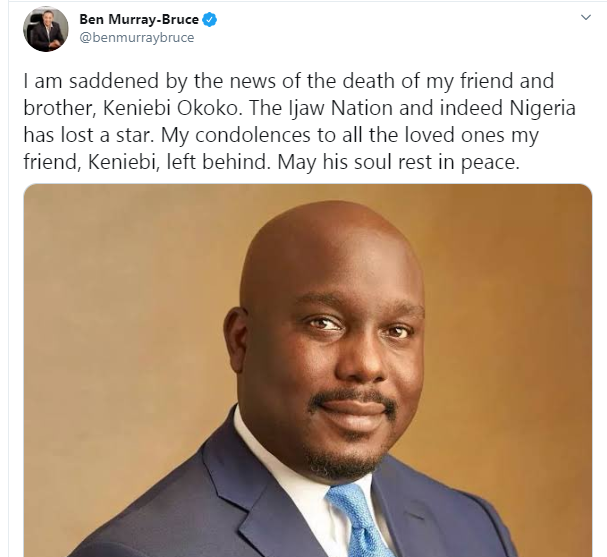 Former Senator representing Bayelsa East Senatorial district, Ben Murray-Bruce has confirmed the death of billionaire and former Bayelsa Governorship aspirants, Keniebi Okoko. It was reported yesterday that the 43-year-old billionaire politician died while reportedly undergoing liposuction surgery in Lagos on April 14. It was gathered that he died in the theatre room in Lagos because of a power outage, as the backup generator refused to come up. Ben Murray-Bruce who confirmed the death of the deceased on Twitter, described him as a "star". He also sent out condolences to all the loved ones Keniebi left behind.
He tweeted;
I am saddened by the news of the death of my friend and brother, Keniebi Okoko. The Ijaw Nation and indeed Nigeria has lost a star. My condolences to all the loved ones my friend, Keniebi, left behind. May his soul rest in peace.

This puts to rest claims of the deceased 'coming back to life,' hours after he was confirmed dead.
Posted by AA
Email ThisBlogThis!Share to TwitterShare to FacebookShare to Pinterest
Labels: lethal, socialmedia
Newer Post Older Post Home