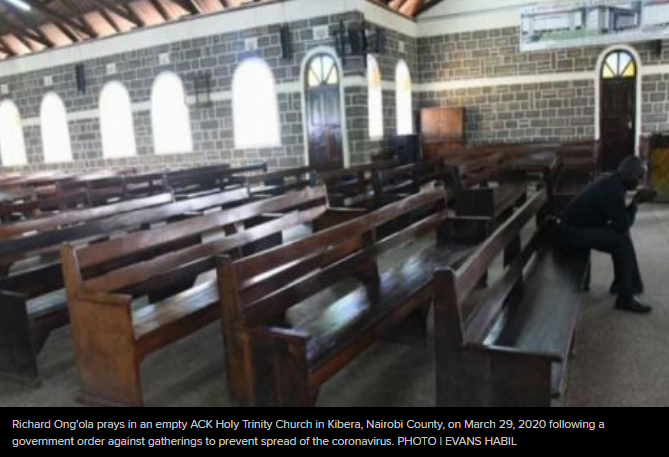 Three pastors have sued Kenyan government after church services stopped operating due to the Coronavirus lockdown put in place to halt the spread of the deadly disease. Justice James Makau of The High Court revealed on Friday that three pastors, Don Mutugi Majau, Joan Miriti, and Alex Gichunge sued the Interior, Health and ICT Cabinet Secretaries, the Attorney-General and the Inspector-General of Police. According to Nairobi News, Justice Makau set the hearing for April 16 and ordered the pastors to give copies of the case documents to the sued parties before the close of business on April 14. In the suit, the pastors acknowledge measures put in place by the government to stop the spread but argue that as the pandemic worsens, Kenyans will look to churches for solace. They are protesting the directive against social gatherings that saw the closure of churches, saying it was reached without consultations with relevant stakeholders. The religious men also say the state-imposed the curfew and the restriction on gatherings without consulting the church. They said that if consultations had taken place, the public would have been sufficiently educated on social distancing and proper hygiene, peace, and unity would have been promoted and food drives would have been held for the sake of the less fortunate. Their lawyer, John Swaka said: “The petitioners (and) other believers are in no way approaching this court in efforts to spread the coronavirus. Their sole wish is to congregate whilst adhering to the directive issued,” He added, “The church’s role in such times is to give hope amid the crisis not only in this country but also in the world at large. They humbly seek the intervention of the court since their rights and freedoms are being infringed.”The pastors further note that judges, doctors, and journalists are risking their lives to serve Kenyans and that pastors should be added to the list of essential service providers in the fight against the deadly disease. The religious leaders note that their services can go on with those in attendance wearing masks and gloves and using hand sanitisers. They want churches allowed to conduct services with leaders compelled to ensure members adhere to guidelines for curbing the spread of the virus. The alternative, they say, is for the government to allow the broadcasting of services on specific days.
The case will be mentioned on April 16.
Posted by AA
Email ThisBlogThis!Share to TwitterShare to FacebookShare to Pinterest
Labels: droll
Newer Post Older Post Home